This was the 6th and final round of this season's league competitions.  The theme was Nature and we saw a wide variety of subjects during the evening including birds, animals, insects, fungi and plants.

Our judge, Daphne Hanson DPAGB, HonPAGB, was faced with the task of scrutinising 66 images before giving them a score.  She did a great job identifying the strengths and weaknesses of each image and deciding on a score.  Daphne commented that it was a tough job because there were a fair number of excellent images.  Her constructive criticism should help us improve our photographs in the future.

You can see the images which scored 19 and 20 below.

Posted by wdpcnorfolk at 13:07 No comments:

Thanks to the combined efforts of Di Jackson and Tim Leonard we had a great outing to Kings Lynn. The weather was bright and sunny, even though it clouded over later. Tim guided us to several areas of interest and provided fascinating insights into the locality.

Although there were over 20 of us we had time to spread out and each take the images that were of interest, providing a very varied selection of photos, as can be seen below. 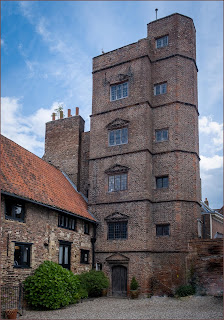 Clifton House Watchtower by Liz Blake
Posted by wdpcnorfolk at 14:47 No comments:

David came to us well recommended to deliver his presentation about his Fine Art Workflow. David started by introducing himself and we were amazed that he had only been using this style of imagery for the last three years. He showed a short video of his images, some of which can be seen on his web site, https://dgshot.uk.

Using photoshop he then took us through the steps in his fine art work flow, starting with a coloured image and ending up with a stunning black and white image which he had toned in various ways to produce the image he envisaged. He explained each tool as he used it and in some cases steps were repeated so it was easier to follow along.

Not for those who liked to spend 5 to 10 minutes just moving a few sliders around but for those prepared to send time on an image the finished photos were excellent and somewhat ethereal.

Most members were most appreciative of David's talk, some were keen to go and try it, whilst others felt that their photoshop skills needed more guidance.

It was a good evening and refreshing that someone was so willing and able to share and explain their workflow rather than just showing the finished image.

Posted by wdpcnorfolk at 13:19 No comments:

It was good to be back in the hall and with more members coming along to hear Justin Minns, a professional landscape photographer who lives just over the border in Suffolk. Justin's talk was titled "Interesting Stuff".

Justin's images were outstanding and he illustrated his talk with mainly, but not exclusively, pictures from the UK identifying four areas of interest, highlighting the time of day, planning the best time of year and the best light; not to mention getting up at a very early hour. Along the way he gave some guidance on composition, different techniques that could be used (including ICM), the effects of using different focal lengths  and also included some details about the use of filters.

He has recently published a book about Photographing East Anglia which gives details of when, where and what can be found in East Anglia, available from Fotovue.

Good to meet in person as it was easier for members to interact with Justin and vice versa. Great evening with many positive comments received from members.

Posted by wdpcnorfolk at 11:19 No comments: